I once told you something that widows are not meant to express, well here is another one for you, as warning Universe Jayne has hit the mildly angry stage.

I am absolutely sick of being able to sort everything out by myself!

Yesterday, I had to take Mum to the walk in clinic as my own pneumonia (I'm not kidding)  has inspired Mum to get a nasty strain of the flu. We were there for five hours. It was raining, so when we were leaving, Mum waits by the door as I grab the car to drive up close to collect her. A man who could make a turtle look young, blasts his horn at me because we are not moving fast enough.
I walk over to him and say:
"My husband is dead, I'm sick, my mother is sick and your sitting there smoking and tooting your horn."

Now what makes me mad is that I said such a pathetic sentence as "tooting your horn."
Me, whose favorite swear word is shit-bollocks-wank - could only muster up tooting.
I burst into tears and hurried back to the car. How pathetic.

Later, for fun in my Christmas Special double feature, I went to sort out the tombstone for David only to have the man ask me  - "Was he ill then?"
What a fucking stupid thing to ask a widow ordering a fucking tombstone - was he ill then?

Look, I don't feel sorry for myself. Life is hard on everyone. I know I have to move forward and I'm  doing that or is the Universe sitting there tooting its horn because I'm not going fast enough?
I wouldn't mind just a little bit of support though. A little smile. A little something to look forward to that does not include me doing everything.

And if any of you dare try to explain that my life is any different than what it is - I will do more than toot your horn. Give me a break and please remind me that I'm just a girl, who lost a boy, who is asking if she can be a girl again!

My brother and I would be up by four am when we were children on Christmas morning.
We would creep down the stairs to the Christmas Tree to find a mountain of wrapped gifts, that had never been there before. Excitement would then burst noisily forth as we declared the house to be up, awake and celebrating as we screamed; "He's been, he's been!"

I have always loved Christmas. Still do. The magic of the possibility of there being a Santa, has never left my heart.

This year it has been different for me and yet easy not to celebrate with the same passion as I have before. I didn't buy a tree. I didn't try to bake gingerbread, make homemade cards or find a perfect gift. I just allowed it all to slide over and around me. Some of the pine needles hurt and some of the cinnamon fragrance is delightful.

I admit, tonight I stayed up beyond midnight. I thought perhaps it was allowed that a widow had a secret kiss, one last conversation of love or the feeling of warmth from a familiar hug. Sometimes I like my imagination and hope, and sometimes I don't care for it. I'm not even asking for three ghosts, just one, I just found myself saying.

I wish tonight for everyone that there is a magic that arrives, despite science, religion, fact or fiction.
Regardless of faith, hope or belief. I wish a tiny piece of bright white love may arrive and beautifully spiral into a sky full of miracles.

I guess I still want to believe. 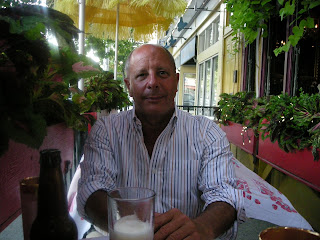 I told myself just now, that I need to get out into the fresh air and look at the sky before I write about what is going on. That I need a q...