In search of Jimmy Tarbuck

You know when people claim to see Jesus on their carpet stain and believe it's a message? Well tonight, I found a strength while thinking about Jimmy Tarbuck. Hence my new empowered thought - The Jimmy Tarbuck Theory.

For those in the USA, Mister Tarbuck OBE is a popular British comedian. For those in the UK - well you know who Tarby is. So here is the journey to my theory and like all stories it has two paths.

One begins in London on a Sunday afternoon when I am traveling with my brother, his wife and two handsome male singers in the back of a tour bus for the brilliant tribute show - Want U Back - http://www.takethattribute.com/#!gigs

David and Michelle had arranged a surprise for me. I knew we were driving to a theater to see a show, I didn't know which show and the choices are interesting considering it's a Sunday. I had read that Jimmy Tarbuck had a show in town and I hoped and declared that it wasn't to see him. NOW of course if anyone connected to the Tarbuck Foundation is reading (ha!) my blog is pure fiction. If not, you all know it's true. He's great, just not desired viewing for a girl looking for a thrill.

Fat story short, that includes a banana, a quick clothing change, a parking ticket and Mary Poppins, we end up at The London Palladium to see Michael Crawford in The Wizard of Oz. For me to be at The London Palladium is a major trip into pure bliss. It will always remain my favorite theater for many reasons starting from when I was a showgirl little girl with ambitions.
Anyway, in the lobby with a bag of  'white wine crisps' (yes you read that correctly) and a sighting of George from George & Mildred, an old British TV show, we find a poster of Jimmy Tarbuck. Everything connects in that glorious moment and I am standing with happiness. I love it.

The second path to my Tarbuck theory is the miserable Jayne who today is incredibly angry. I am bitter enough for lemons to go on strike. When I'm in that mood, my voice sounds like a cockney Popeye on a swearing marathon. Then the anger gets worn out and changes into Super Sad - the heaviness with a cape of depression that can freeze an expression and bring sarcasm to a birth and or wedding.

So I'm sitting in my Super Anti Hero costume, putting together a puzzle (hey, don't judge - its Christmas!)
When I wonder; "when did I last feel I was in the right place?"  London - Jimmy Tarbuck poster, Palladium Theater. And Bang! The simplicity and power in that memory hits me. During that time I was being happy because of something I had created and right now, I was being sad because of something someone else had created.
Their way of living, not good or bad, has nothing to do with my way of living. I make my choices for what I believe to be right and how I react is not how others react. In this particular "can not be named" scenario, nothing is the right or wrong way, it's just different.

My theory is more than just the realization that we control only our own responses.  It is also far more than just choosing to say you are happy. It is the courage to accept everything you feel. It's the strength to accept the difference, to embrace it, learn from it and answer back with action that demonstrates your pride and integrity. Not to others. Fuck others. Demonstrate it for and to yourself.

Now the hard part: to move on. In little steps or huge mountain strides, leave the sadness alone, because those who caused it are now meddling in another kitchen. They are blind to what you do. You're not.

I am sick of living my life in response to other peoples actions. Well, truth is, I never realized that's what I've been doing for forty five years. It only came to me tonight, thinking back to the moment with the poster.

Jimmy Tarbuck is known for having a gap between his front teeth. The gap between happiness and sadness is small and it takes a brave spirit to jump from one to the other. Some may need to build a bridge, some will dwell on the gap, while others make it a feature. Like Jimmy Tarbuck does and I like that about him! Thanks Tarby. 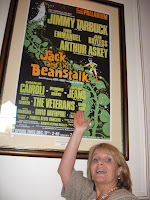 I have had so many thoughts recently for blog posts that could be inspiring for those around me, and yet I can never quite find the words. M...