So, we went to see Holly Potter (as its known in our household) on Saturday.
It's a great movie. It must be good because I did not understand a bit of it and yet I still enjoyed it.
You have to know, follow, read, re read, see all the movies before seeing the latest one to remember who BobblePeekGoswold is compared to GobblepeedCodfort. I know I have said it before but I'm not good at remembering names let alone the complicated fancy ones.

I was surprised when a elf called Dobey appeared. I thought he was in Lord of the Rings.

I was also surprised when I realized I had eaten all my chocolate covered pretzels only ten minutes in.

Congratulations to JK Rowling. What a woman. I can't even write a blog without getting stuck, yet one book of hers will make three movies. She made a familiar concept, that of a quest to collect stuff in order to get something solved, into the incredible Potter world.

All of us have quests. Mine was written as follows:
If thou art brave to collect the following yee will be happy:

Dr.Who and the chocolate need

Is it too early in the morning to eat chocolate? I feel like I am caught in an episode of Dr.Who. (I know for some they will not get that... 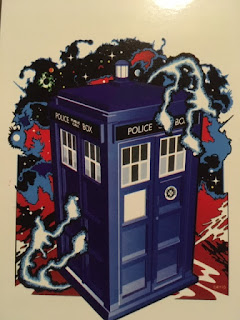